Metro Mayor Steve Rotheram has today announced that, as part of his Race Equality Programme, the Liverpool City Region will be a host city for The World Reimagined – a national art education project that works to transform our understanding of the Transatlantic Slave Trade and its impact on all of us to help us make racial justice a reality. 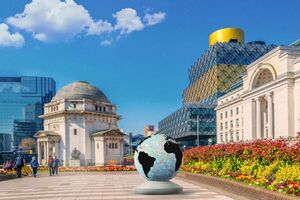 A digital impression of the Yinka Shonibare Globe, The World Reimagined Globe Installation.

In development since 2019, The World Reimagined will see trails of large globe sculptures in cities across the UK August- October 2022. The sculptures will be created by artists to bring to life the reality and impact of the Transatlantic Slave Trade – responding to the themes ranging from ‘Mother Africa’ and ‘The Reality of Being Enslaved’ to ‘Still We Rise’ and ‘Expanding Soul’. The globes will be created by both established and undiscovered artists, alongside unique collaborations that bring together national and international icons and communities with local and global artists.

“As part of our programme of work on race equality, I am delighted to welcome The World Reimagined to our city region.

“Our port played a prominent and shameful role in the slave trade and, as a region we are still coming to terms with its legacy today. Learning from the mistakes of the past is essential to stop them being repeated and, in that regard, our International Slavery Museum is an invaluable resource for local schools and visitors to our region alike.

“These days, our region’s diversity is one of our great strengths. It enriches our culture, economy and the very fabric of our society.

“It is depressingly clear that there is still much work to be done to tackle racial inequality in this country. In the Liverpool City Region, we are taking practical, proactive and positive action to level the playing field and overcome bigotry and discrimination through the Race Equality Programme I launched last year.

“Bringing The World Reimagined here will be an interesting and interactive way to build on that work and I’m certain our schools and community groups will have an active role to play in shaping the wider programme over the next few months.”

The trails will be the centre of a broader learning and community programme – with schools, community groups, sporting and cultural institutions from across the Liverpool City Region taking part – that will deliver significant, proven community benefit as well as economic and visitor uplift as the City Region continues its recovery from COVID.

The World Reimagined team will work closely over the next year of development with people, organisations and communities across the Liverpool City Region to ensure that the final trails and activities are deeply connected to the region’s communities and place.

Alongside the Liverpool City Region, The World Reimagined will see trails in 6 other cities across the UK, with 250+ schools and colleges participating in an experiential learning programme and 1m+ visitors will actively engage with the trails.

Artists who sign up to the Open Call will be able to access Masterclasses and have their designs considered by a Jury that features Turner Prize winning artist Chris Ofili CBE; senior curator Renée Mussai; Chisenhale Gallery Director Zoé Whitley; and Professor Matthew Smith, Director of UCL’s Centre for the Study of Legacies of British Slavery.

The World Reimagined trails are being delivered in partnership with global public art producers, Wild in Art, who have a proven track record of creating world-class events which entertain, enrich, inform and leave a lasting legacy. Previous work includes Superlambanana in Liverpool, the London 2012 Olympic and Paralympic mascot trail, the award-winning Bee in the City in Manchester and The Big Hoot and The Big Sleuth trails in Birmingham.

“If we’re going to make racial justice a reality for all, it calls on us to courageously face our shared history with honesty, empathy and grace. If we do that, we can create a future in which everyone can say I’m seen. That’s the mission of The World Reimagined and we’re so delighted to work with the people and communities of the Liverpool City Region.

“Given the City Region’s deep historical connections to the Transatlantic Slave Trade, it was very important for The World Reimagined to take place here, enabling us to work in partnership to build upon the powerful dialogue being had in the city around our shared history and racial justice.

We hope you will join us.”

Schools will also have the opportunity to access to bursaries and artist residencies as part of the project. More information is available here.